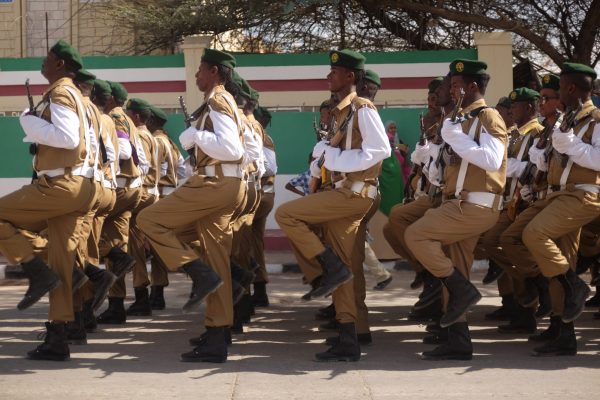 Welcome to the unrecognized country of Somaliland. Every May this east African nation celebrates its “independence” from the rest of Somalia.

Somaliland declared itself independent in 1991 after a civil war in which Somali dictator Siad Barre bombed the rebel Somaliland capital Hargeisa to hell and back. Somalilanders re-grouped and fought a guerilla war from beyond the border in neighboring Ethiopia from 1988 to 1991. After the war, the local Somali National Movement unilaterally declared independence from the south. They have celebrated on the streets of Hargeisa every year since. It’s independence remains unrecognized by any state or international organization.

As the only foreigners there, our group were flanked by 4 Special Protection Unit armed guards. The guards cleared a path through the human wall lining the streets and gave us the front row view. Behind us the security forces used whacking sticks and tasers to keep the locals from spilling over onto the parade route.

As we cooked in the morning sun, along came immaculately dressed firefighters, police and army units in formations. Artillery and armored vehicles followed along with homemade converted Toyota pickups with heavy caliber weapons nailed to the trunk.

When the last of the ranks strode past we followed suit waving to the delegates in the viewing box. The president himself was there waving back with joy.

For that split second we felt right at home until we turned to see a huge crowd that had formed around us, shouting questions and seeking selfies. After successfully meandering our way through the sea of people it was onto the next stop to continue the celebrations. A evening banquet dinner dance.

Don’t miss your chance to join the Somaliland Independence Day celebration in a country that officially doesn’t exist. Check out our Somaliland Tour here!

Why You Should Visit Asmara